I finally completed the buddipole as I scrambled to pack before leaving Thursday morning for the camping trip with the scouts. Soldering the PL-259 connector onto a piece of RG-8 mini that I had dangling from the 70 cm Jpole I never hooked up. It was all of about 30 feet, but it was enough. 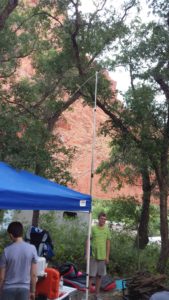 We found a pretty good camping location in the Hal canyon campground along highway 128. We set up camp and I got the radio hooked up. Since I have never had to manually tune my radio given that I usually have my AH-4 auto tuner hooked up, I brought my manual along so I could look into it. It turns out the IC-7000 has a neat feature that lets you plot a range of SWR across a segment of a band. I hooked up the buddipole with the 20m coils following the recommendations in the instructions and extending the whips all the way minus a quarter of one segment, and proceeded to tune it. I was unsuccessful in finding anything close to a 1.5 match though, so I extended the whips fully and found that it tuned well in the Extra only segment of the bad. We were able to pick up a station from northern Italy and another one from Spain, but were not able to make any contacts. I think it had to do with the narrow canyon we were in. 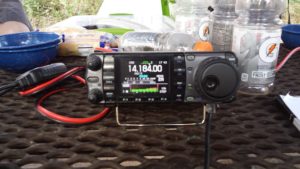 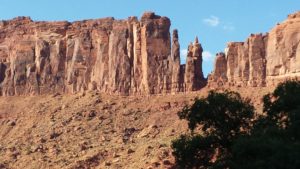 I am planning a trip to Arches National Park next weekend with my Scouts. As the scoutmaster, this is extremely convenient as this weekend is also Field Day. Also, we will be in a national park which means we can do NPOTA. I have the portable HF rig, (an Icom IC-7000) and the power. What I lack at the moment is a portable antenna.

I am working on building a Buddipole as described by WW1X on his video at https://www.youtube.com/watch?v=Z6ATX2Z9ews. I ordered the featherweight whips and a pole adaptor. Now I need to go to the store to get the rest of the components.